Find all the colors of spring at The Bronx Museum of the Arts! Hop into the colorful, poetic world of Angel Otero’s abstract paintings during an afternoon of family art-making activities. Featuring workshops with PEN World Voices Festival of International Literature: Resist & Reimagine and The Bronx Council on the Arts. Explore new ideas with fellow writers and artists, and work with renowned poet and children’s book author Tony Medina!

Recommended for children ages 4 to 12 with parent/ guardian, but all ages are welcome! 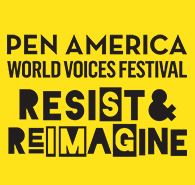 PEN World Voices is America’s premier international literary festival, attracting the best known writers from across the globe. Since our founding, we have presented more than 1,800 writers and artists from 118 countries speaking 56 languages in venues across New York City in a weeklong series of literary events with a human rights focus. The Festival was founded by Salman Rushdie, Esther Allen, and Michael Roberts in the aftermath of September 11, 2001, with the aim of broadening channels of dialogue between the United States and the world—a mission that, today, has never been more relevant.