Hop off The Bronx Trolley at the Bronx Museum for a celebration of Women’s History Month with La Reina Del Barrio, Rhina Valentin! During the event Rhina will award four powerful women with the NYC Mother’s Flo – Women in Film and Media Award for effortlessly balancing career and family. The night will be filmed for broadcast on her new television series, COLORS OF RHINA. Presented in collaboration with COLORS OF RHINA. 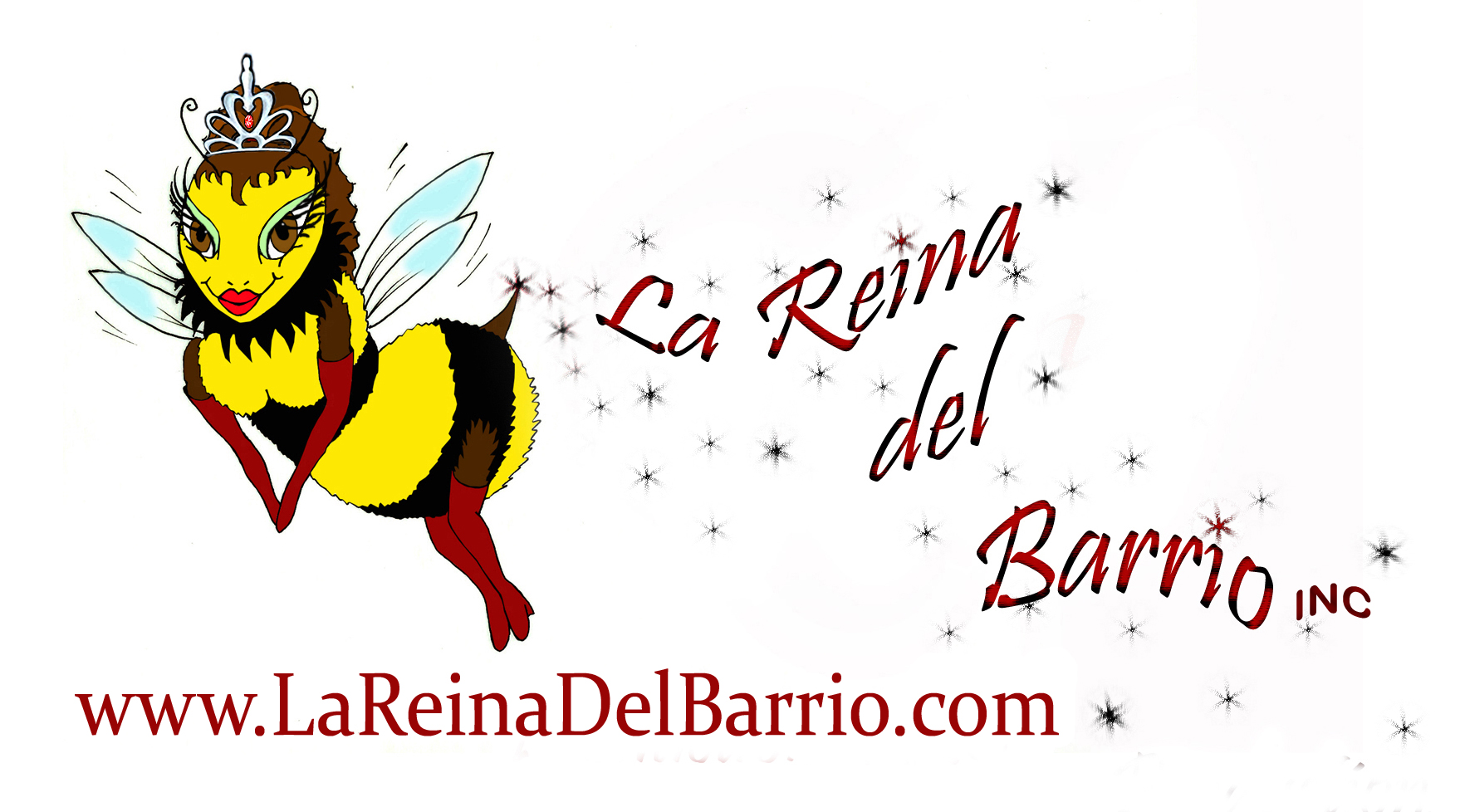 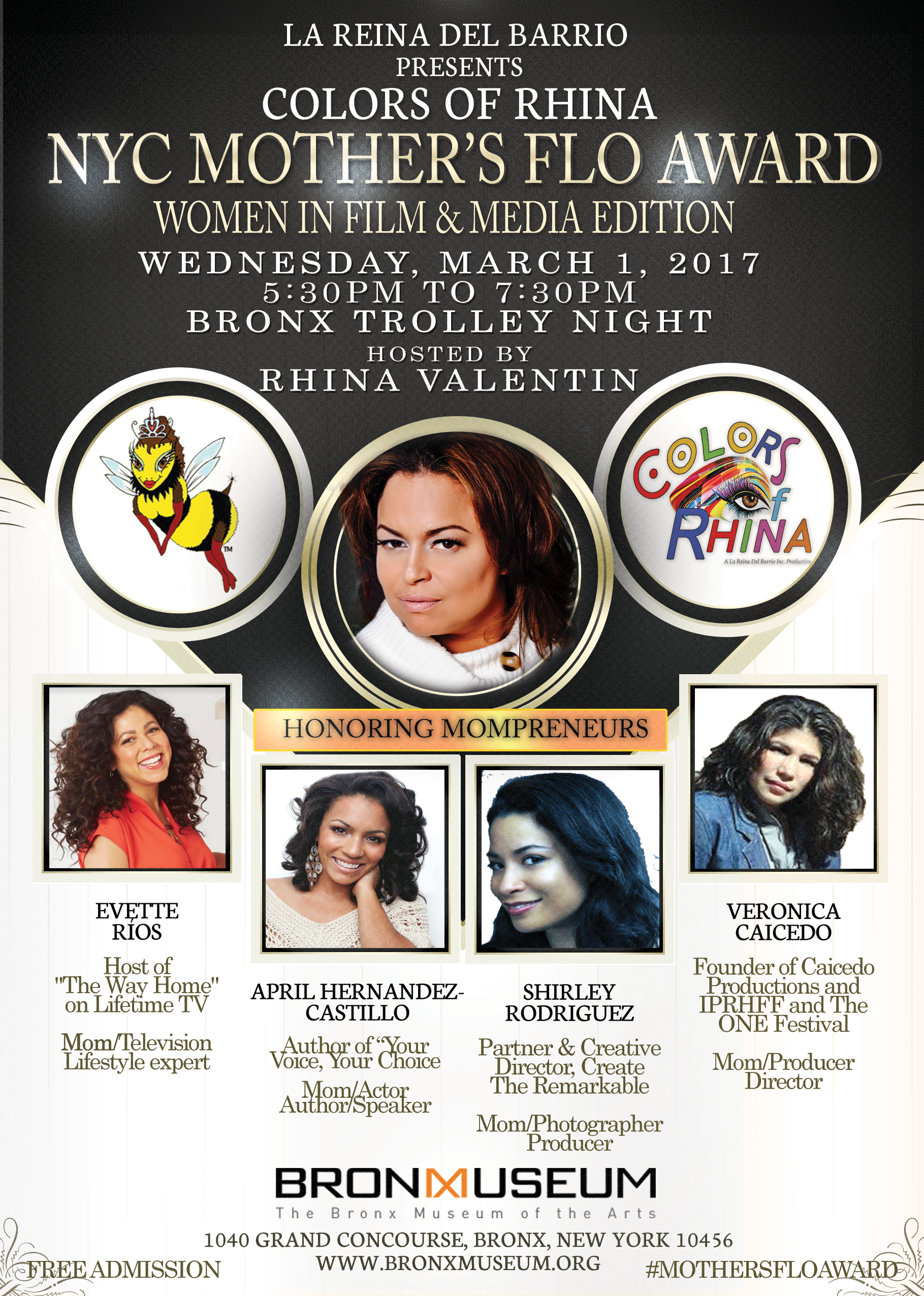 About RHINA, Creator & Producer of “COLORS OF RHINA”

Rhina “La Reina” Valentin, a “Jane-of-all-trades” in the arts and entertainment industry is a proud New Yorker. Credited with the highest-rated audience on BronxNet TV, Rhina celebrated her 10-year anniversary as host of the award-winning morning talk show, “OPEN Friday.” Whether live, on-set or through the TV, Rhina’s effusive personality has won the hearts of her admiring audiences. From heart-breaking life-events to joyful celebration, Rhina’s thoughtful and thought-provoking conversation explores the depth of our individual and collective humanity.

Highly acclaimed for her performance in HBO’s “Betty La Flaca,” Rhina has appeared in national spots for Bally’s & 1800-Flowers. Among many notable awards and recognitions, in 2015, Rhina was a recipient of the 25 Bronx Influential Women Award from the Bronx Times Reporter. She is the creator of COLORS OF RHINA, a new show celebrating and showcasing New York’s rich multi-cultural and multi-ethnic heritage, will debut in the fall of 2016 on MNN (Manhattan Neighborhood Network) and its new HD Channel.

Hop off The Bronx Trolley: First Wednesdays Arts & Culture Tour at the Bronx Museum for a free guided tour of the exhibitions with a Museum teaching artist

WHAT IS THE BRONX TROLLEY?
The Bronx Trolley is a project of the South Bronx Cultural Corridor.  Making a cultural loop through the lower Grand Concourse and in other sections of the Bronx, it provides an innovative way to travel free while giving Bronxites and tourists alike the opportunity to sample several of the area’s hottest cultural attractions, dining establishments and entertainment venues.

WHERE DO YOU PICK UP THE TROLLEY?
First Wednesdays Trolley begins at 5:00pm at the Longwood Art Gallery @ Hostos which is located at Hostos Community College, 450 Grand Concourse & 149th Street (easily accessible by the 2, 4 & 5 trains and the BX1 & BX19 buses). The trolley departs from Hostos at 5:30pm, 6:30pm and 7:30pm, making a cultural loop through the lower Grand Concourse, dropping off riders at their selected stops and picking them up at the next go-around.

Evette Ríos is a Puerto Rican television host, lifestyle expert, writer and native New Yorker. She is the host of Recipe Rehab airing every Saturday morning on CBS. On Recipe Rehab, families submit a favorite high-calorie recipe. Chefs then compete to create healthier, lower-calorie versions - and make them easy for amateurs to duplicate. Prior to her work on CBS she starred on ABC's The Chew as field correspondent and roving reporter. Latina Magazine has embraced Evette as one of the “50 Reasons to Love Being Latina Right Now,” calling her the “Mobile Martha Stewart.” Her role on The Chew made her the only Latina on a national daytime talk show. Evette is also a regular contributor in Spanish to Univison’s Despierta América, Tu Desayuno Alegre, Al Despertar and Telemundo’s Buenos Dias Nueva York. Recently, Evette was named Director of Development for Latina Media Ventures 3 brands, Latina Magazine, Latina.com and The Latin Kitchen. She posts weekly blogs on her own site, evetterios.com, and is a contributor to rachaelray.com, xoJane.com and Parade.com. Her Puerto Rican roots, love of travel, and years mentoring with some of NYC’s finest architects and designers have both inspired and influenced Evette’s work. However, nothing sparked her food and design interests more than watching her parents cook and work on homes together as a child. She lives in downtown Manhattan with her husband Stephen, baby, Yagüez, dog Baloo, cats Henwin and Miss Kitty.

The CEO, founder and “heart and soul” of Caicedo Productions Corp, Ms. Caicedo is an innovative, director, producer and writer who has overseen more than 30 successful theatrical productions. Drawing upon her urban cultural experiences and extensive creativity, Ms. Caicedo has used her unique vision to produce and/or direct such projects and plays as Black Latina the play, They Call Me LA LUPE (Starring Lauren Velez of “Dexter”), SUNSHINE by Lawrence Dukore, Patrick Marber’s Closer, The ONE Festival, International Puerto Rican Heritage Film Festival and Faded by Robert Dominguez, among others. Ms. Caicedo has served as Theater Director for Project Reach Youth, Teatro El Puente and The Loisaida Players at Loisaida Inc., where she was a safe-sex educator. For over a decade, she was Managing Theater Director for Teatro LATEA at the Clemente Soto Velez Cultural and Educational Center and now she is the Operations Director for The Center.

In addition to producing, writing and directing her first independent feature, Circle of Time, Ms. Caicedo also produced and directed an independent feature, Shut Up and Do It; an educational film, “Loss Of Innocence In Loisaida,” short films; “Diary of a Teenage Reporter”, “Little Courage”, “9/12”, “El Tumbe” and “Helen of T-Roy”. In music videos and TV, Ms. Caicedo directed “The Colors of Love”, “En la Oscuridad” and “My Weakness”. A graduate of SUNY College at Purchase, Ms. Caicedo is a member of Chicas in the Biz, IFP (Independent Films Projects), NALIP (National Association of Latino Independent Producers), NYWIFT (New York Women in Film and Television) and LULAC (League of United Latin American Citizens).

About April Hernandez-Castillo
Reaching critical heights in her portrayal of Eva Benitez in the award-winning movie, Freedom Writers, earned her recognition and critical acclaim confirming her status as one of the more talented up and coming actresses.  Now displaying the talent and drive to parlay success into a career as a respected actress, April garnered roles in the FOX pilot Blue Blood and Showtime's Nurse Jackie, CBS's Person of Interest, ER, 30 Rock and received a SAG Award nomination for her role as Officer Cira Manson in Showtime's award winning drama Dexter, a role in J Anderson Mitchell's sci- fi comedy Future Folk , guest-starred as Danny Pino's sister on NBC's drama Law & Order: SUV, and on 2 episodes of FOX's hit show The Following.  You can also catch her recurring on the new show Feed the Beast on AMC starring David Shwimmer this spring.

Shirley Rodriguez is a New York-based editorial and commercial still and motion photographer and media producer. A celebrated photographer, Shirley has shot for notable brands including Olay, Fruit of the Loom, CoverGirl, Girls Scouts of the USA, Pantene, Isaac Mizrahi, and the HBO New York International Latino Film Festival, for whom she collaborated on the 2008 campaign that won HBO the PromaxBDA Bronze Award. Her work has been appeared in Latina, Crain, Siempre Mujer, El Diario, Metro, Hispanic, Urban Latino, The New York Times Online and Vibe magazines among other notable publications.

Passionate about media education, Shirley has had residencies and worked with various programs as an arts educator including The Tribeca Film Institute, Manhattan Youth, the Educational Video Center and The Brooklyn Children’s Museum. In line with her history of community and advocacy work, in 2012, she was one of 4 professional Latina moms selected to address First Lady Michelle Obama at a historic round table discussion where she discussed the issue of resources for those affected with autism spectrum disorders.