In the past year, I have performed shamanic rituals at architectural ruins and abandoned rice fields in the Korean Demilitarized Zone, buried urns filled with mourning flowers at American national parks, and roleplayed folklore characters in the Hudson Valley and absurdist installations constructed in the studio.

Through performance-based films, I explore Korean folk traditions and spiritual practices. Passed on generationally, they connect me to my family and to a land whose absence I feel palpably. However, in my work I am not faithful to historical canon. I reimagine rituals to reflect current social and political concerns within diasporic Asian American perspectives. My rituals are meditations on land, trauma, diaspora, and race.

A young Yu is a Korean-American artist based in New York. She received her MFA in Visual Arts from Columbia University. She was awarded the Gold Prize by the AHL-T&W Foundation and was nominated for the Rema Hort Mann Foundation’s Emerging Artist Grant. Her work was also featured in the Christie’s Educational annual journal. She has been exhibited at venues Fredric Snitzer Gallery, LeRoy Neiman Gallery, Time Square Space, Jewish Museum, Vermont Studio Center, and more.

Without knowing about your focus on Korean traditional spiritual practices, the first impression made by your work is its extensive use of organic reference - which elicits a visceral sensation. Could you discuss this element in your work?
In my research, I am invested in the history of Korean spiritual practices. I think of them as archives of pre-colonial theology with influences that are still palpable in present day culture. In my practice, however, I am not interested in engaging with older rituals in accordance with their original forms. Rather, I explore how they can be transgressed, feminized, queered. I am interested in how they can exist in new contexts.

To this end, I construct immersive and sensorial environments that function as physical sites for new rituals to be born. I think of these environments as wombs with their own corporeality, gushing with viscera, which I interpret as a life force, at every crevice. They are intended to be organic incubators that incite new rituals borne out of the poetics of chaos.

What have you learned about yourself or your identity through your representation of traditional Korean spiritual practices?
The more I research and create, the more I realize how malleable and transformative these spiritual practices are. They are not fixed forms, nor do they exist autonomously from the world we live in. The idea that they should remain fossilized is outdated. I’ve learned I have the agency to construct my own sense of belonging through the language of cultural tradition and heritage. In my practice and as an individual, the sacred has become deeply personal.

Moreover, I’ve learned that spiritual practices present an opportunity to find new ways of thinking about connection to ancestry and deceased loved ones. As these practices are passed down generationally, I will soon be confronted with the question of what my role is in gatekeeping traditions. I think about how I can take elements from traditions — preparing certain dishes, creating spaces for communal gathering — but also create changes to reflect more the reality of diasporic Asian American communities.

Could you tell a bit about what you are you currently working on?
In the coming months, I will be traveling to Korea with my collaborator, Nicholas Oh. We recently established a collective, Aydo Studios, to realize our projects together. We are currently working on an expansive performance-based project that explores the language of folklore and pre-Buddhist rituals to speak to collective and personal loss. In Korea, we will be shooting in the DMZ, where we will create rituals based on the red-crowned and white-naped cranes that migrate to the abandoned rice fields during the winter from North Korea, Northeastern China, and Far Eastern Siberia. This stretch of land situated at the DMZ, where habitation is prohibited, is an accidental and now heavily guarded wildlife refuge. We are thinking of the symbolism of this area as a complex collision of beauty, sanctuary, violence, and trauma. We will also be shooting in burial mounds in Gyeongju, former capital of the ancient Silla Kingdom and at bronze ages stone tombs in Ganghwa-do Island, which is considered the origin of Korea in mythology.

Has your art, practice, or ways of thinking about art changed during the past year?

When the quarantine first began, my practice was very meditative and introspective. With time itself seeming to slow down, I adapted a more solitary process in my studio. I developed a series of rituals centered on grief. Whereas the movements for my performances are usually carefully choreographed, the movements for these rituals were much more personal and reliant on instinct. Gestures of cleansing and burying my body in repetition became central to the performance as I reflected about cycles of loss and rebirth.

Gradually, I found myself in conversation with a community of artists and the idea of collaboration became more present in my work. From June 20th to July 14th 2020, during a time when the pandemic began spreading rapidly across the states, artist Nicholas Oh and I drove across country and performed mourning rituals at various locations: Grand Teton Park, Yellowstone National Park, Zion National Park, and rural areas in Pennsylvania, Illinois, San Diego, New Mexico, Texas, Louisiana, Georgia, and South Carolina. During the performances, we created temporal shrines and buried urns into the earth. We explored what it meant to perform Korean mourning rituals on American land as marginalized artists during this time.

When we returned, I had the opportunity to collaborate with mentor and artist, Michael Joo, on a sound/image-based project exploring intimacy and haptic relationships. I also began planning new projects with other artists, which I look forward to realizing throughout 2021. The introduction of collaboration into my practice was a surprising but very welcome change. During this time of enormous challenges on both a global and individual level, collaborative work became a refuge, a space to process and find solace together. 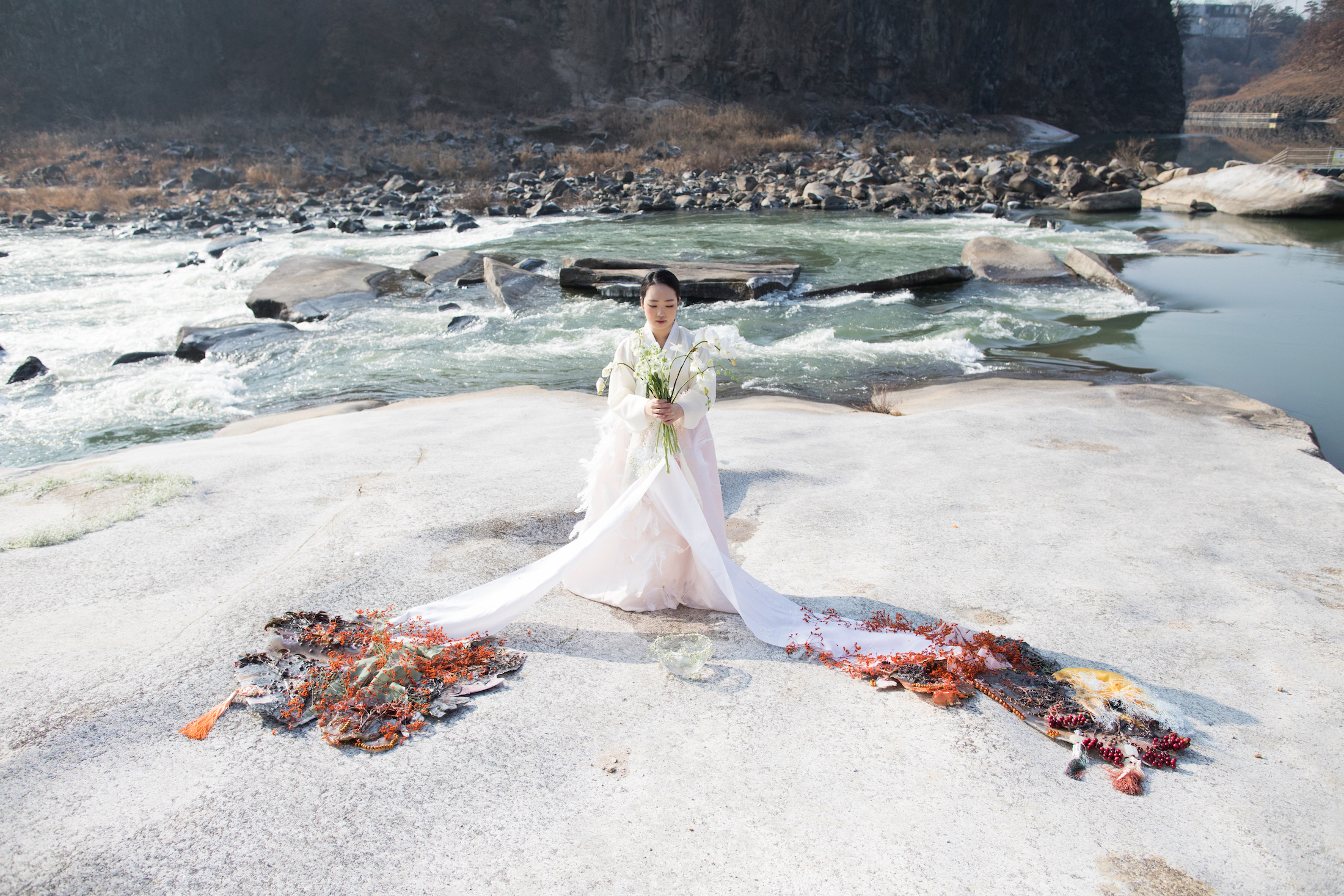